A look into how complicated the underlying problem really was and why the previous solution ultimately failed.
October 6, 2021 coh2 modding

CheatCommands Mod II (referred as the mod for the rest of the article) is a popular utility mod for Company of Heroes 2. It allows users to take almost full control of the game with powerful tools. These tools include ability to spawn almost any unit, building, and commander ability.

Video game mods usually have to stay up to date with the base game to maintain functionality. This is especially true for the mod because it contains pre-defined lists of units, buildings, and commander abilities. Whenever an update is released for the game, the mod may potentially reference a unit that no longer exists or miss a newly added commander ability.

Issues like the ones mentioned above may lead to expressions of disgruntlement from the mod’s users, and rightfully so.

Company of Heroes 2 is a large game. It has 5 factions, 80 commanders (71 that can be considered accessible & non-duplicate), and 215 distinct commander abilities. The mod provides access to all of these commander abilities and any of them may change in any update to the game. Maintaining the list of commander abilities quickly becomes a daunting task. I’ve always hated repetitive tasks and making sure 215 commander abilities remain functional after every CoH2 patch certainly fits that description.

Naturally in this situation any software developer would seek to find out if a list of commander abilities could instead be automatically generated. This way there would be some level of guarantee of not making a mistake or 2 while manually updating the list and the mod would be easier to keep updated and functional after each CoH2 patch.

I originally (several years ago) chose the official Company of Heroes 2 Modding Tools as the source of data for generating a list of commander abilities. This was an easy choice to make because the modding tools provided all the game’s attribute files in standardized XML format.

Utilizing the game files directly for generating a list for commander abilities would ensure the source data is always up to date. However this is a bit more complicated because most of the game’s data isn’t available in human-readable format. Instead the data is in binary format, RGD. There are no official tools for extracting information from this data format but luckily most video game binary formats have been cracked/reverse engineered. Examples of individuals who have released tools for the Relic’s RGD format are Corsix (author of the Corsix’s Mod Studio) and Copernicus (author of the Cope’s RGD Tools).

I used Cope’s RGD Tools to process CoH2 RGD files. Unfortunately CoH2 RGD format had changed since the release of Cope’s RGD Tools a bit. Luckily Cope implemented their tools with .NET which allowed me to decompile them with ILSpy and add support for RGD data type 4 which is a value scoped to a specific mod’s GUID . It seems that more recent CoH2 updates accidentally left in references to mods used to create community-powered patches to the game. Gaining access to source code (although machine-generated) of Cope’s RGD Tools also allowed me to inject a generated hash dictionary based on the modding tools data.
RGD uses hashes to shorten text-like references into just 4 bytes of data.

Now that we have a better source of data for generating a list of commander abilities, we’re ready to dive into the bigger problem that lies below the surface.

How do we figure out which ability and upgrade belong to which commander abilities? Easy! Commander abilities have direct pointers to both entries. But these fields are not mandatory. Either one of them could be missing, but not both. There are 215 commander abilities. What are the stats regarding how complete the data is?

My original approach of resolving the missing ability → <upgrade> and upgrade → <ability> links was to iterate over the data and make educated guesses. Some examples of these guesses:

This approach lead to an incredibly complex program that grew over the years. It was able to figure out most of the links and it was something that I could trust with some level of certainty. The output of the original solution was also adapted to support other projects, namely the official Relic Entertainment’s New Commanders preview mod.

Technically the original approach simulates the game to some degree in order to figure out the missing links. This process will never be perfect until the program is the game. This rather pessimistic realization lead to a tiny, seemingly silly idea. What if we use the actual game to do the simulation?

The mod is based on SCAR. It’s an embedded version of the Lua programing language. The game provides a large API to manipulate the game itself. I personally host a copy of the officially released SCARDOC on https://scardoc.coh.fi/.

Here’s the silly part of the idea. What if we iterate over all commander abilities, and based on missing data we make some tests:

In addition to the tests above, the lists of ability and upgrade candidates for both test cases are heavily filtered to prevent duplicate matches:

This approach could be considered to be brute-force.

With the logically filtered test data sets, we can start testing each ability. However not all abilities are casted on a position. Some abilities are very specific, like the British Forces’ Early warning. 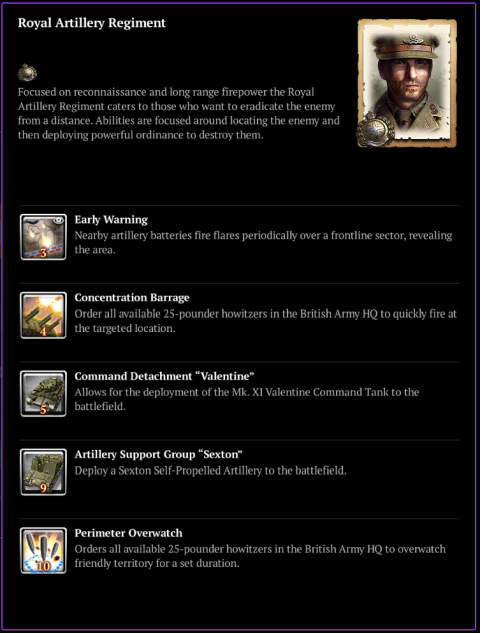 Early warning ability has to be clicked on a position that is on a friendly frontline sector.

The setup involves creating an environment where all known additional requirements are met:

Once all possible requirements are filled, a list of ability test cases is created. The possible ability cast tets are:

Having ensured that the player has all possible additional requirements met, we can iterate over all commander abilities and resolve the missing links. As described earlier, the test executed per ability is quite simple:

The per-ability test goes through all the ability cast tests. If one of them passes, the link is considered to be resolved and a match is formed.

How accurate is this process then? As of October 2nd, 2021, the process is 99.5% accurate. Only 1 of 215 commander abilities cannot be resolved with the methods described above. It’s the British Forces’ Commando Glider Insertion, which is a directional ability. I’ve decided to manually resolve this commander ability for now. Perhaps one day I’ll look into fixing it, but 1/215 isn’t too bad. Certainly not a repetitive task, by definition!

CheatCommands Mod II is finally up to date and any future updates to CoH2 should be easy to apply to the mod as well. Hopefully this article provided interesting inside information on how complicated properly maintaining a video game mod can be.

Commenting is based on https://disqus.com/ - a commonly used 3rd party commenting service for websites and blogs. It will most certainly add cookies to your browser and track you. It will not be loaded until the user clicks the button above.